Frog legs are one of the better-known delicacies of French and Cantonese cuisine. They are also eaten in other regions, such as Thailand, Vietnam, Indonesia, the region of Alentejo in Portugal, Spain, Slovenia, northwest Greece, and Northern Italy, as well as the Southern regions of the United States.

Currently the world’s largest exporter of frogs is Indonesia, also a large consumer. In regions such as Brazil, Mexico and the Caribbean many frogs are still caught wild. A type of frog called the edible frog is most often used for this dish.

Frog legs are rich in protein, omega-3 fatty acids, vitamin a and potassium. They are often said to taste like chicken because of their mild flavor, with a texture most similar to chicken wings.The taste and texture of frog meat approximately between chicken and fish, there was a slight fishiness that some might perceived it tastes mildly like fish.

Frogs are raised commercially in certain countries, e.g. Vietnam, India, Thailand and China. Frog muscle does not resolve rigor mortis as quickly as warm-blooded muscle (chicken, for example), so heat from cooking can cause fresh frog legs to twitch.

There are no reviews yet. 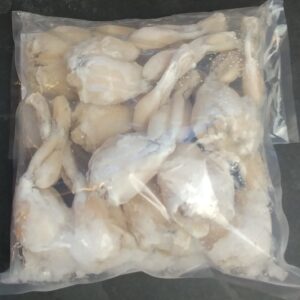